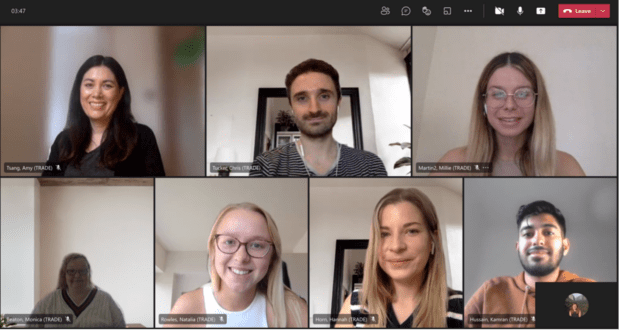 A screenshot of an MS Teams call with the Engagement and Strategic Adoption team. Bottom right: Kamran Hussain.

I had just completed my second year of studying Digital Media Design and Development at university. I wanted to make sure I would be making the most of my summer before heading into my final year. The Summer Diversity Internship Programme (SDIP) was exactly what I needed.

I was excited to hear back that I would be working in the Digital Data and Technology (DDaT) Engagement and Strategic Adoption team at the Department for International Trade (DIT).

Why I applied to the programme

Before I started the programme, I researched the different government department’s priorities. My main priority was to discover what civil servants are working on across different departments. When applying for the programme, you are given the choice of areas to be placed in. With my degree being related to IT/data and design, I chose to be placed in DDaT. This was the closest area in line with my interest and I wanted to know more about the technology and data side within the Civil Service.

My DDaT placement would give me an insight into their tools and how they use them to support their day-to-day work and meet business needs.

When applying for the SDIP, the process included doing multiple tests and writing a paragraph to express my motivations for the role to go alongside my preference of which department I would like to work with. I then had a telephone interview with the Fast Stream discussing my motivational paragraphs with a series of competency questions.

These questions are related to Civil Service behaviours where I had to discuss past events of both achievements and struggles using constructive criticism. It was a fun exercise for me to showcase what I have achieved, both academically and in my personal life.

The Fast Stream provides a progressive route to attaining a Grade 7 role at the end of the scheme through the FAST pass. The FAST pass will allow me to be fast tracked to the final interview stage for the Fast Stream Assessment Centre, by passing the online tests and video interview.

I provided support on the product adoption campaign for officials working on Free Trade Agreements (FTA) to use a new technology platform. I joined multiple calls and looked at the pros and cons of the transition from the former platform to the new one. I worked on developing DDaT’s culture by publishing a page on DIT’s intranet about DDaT Champions. They are our internal DDaT advocates, and I worked on the back-end of the site to improve ways colleagues could get in touch.

I also organised chats with DDaT colleagues regarding DDaT’s Brand Channels, including Digital Trade. Using this feedback, I was able to create a presentation to play back my findings.

My experience of working in the DDaT team

I started off asking questions which helped me build knowledge on various tasks and projects. Aside of work, I really enjoyed the team culture from a remote setting at home. DIT provided me software whilst the team made me feel like a valuable member when I had to learn everything from scratch.

Every morning we have a standup, which is an informal discussion for 15 minutes. The team speak casually about what’s on their mind and then end the chat with what work they will be getting on with for the rest of the day. It is like a team building exercise which I believe has helped build team cohesion.

Weekly, there are calls for everyone in DDaT, known as DDaT Huddle, Lightning Talks and Show and Tells. These calls are very informative, while also not being too formal, which is a nice break from work in the middle of the week.

I also came to realise quickly that Civil Servants use a lot of acronyms, which would sometimes leave me lost in meetings but luckily, DDaT had an acronyms dictionary known as ‘acronym buster’.

Lessons learnt on my internship

My manager organised networking calls for me throughout my time as an intern. These calls were very insightful as they gave me the chance to learn about different roles in DIT and what each of those role's entail. These included:

The 6-week internship has provided me with invaluable experience of what life as a Civil Servant would be like. It has given me the experience to meet a diverse range of people and network with colleague’s across DIT. I am more certain than ever that I want to become a Fast Streamer through the Civil Service because of the opportunities the SDIP has provided.

Find out more information about the Summer Diversity Intern Programme

Sign up to receive blog alerts from Digital Trade